This article is about how to get it to look like your superhero character is "moving" during a flying animation in Muvizu:Play. Flying movement is something people have asked a lot about since the Heroes & Villains pack was made available, and the good news it's not only REALLY easy to get this effect but it also doesn't require any software besides Muvizu:Play. No green screening, no outside hocus pocus - just three easy steps using nothin' you, your mouse and Muvizu:Play!

Step 1: The World Below

The first thing we need to do - after opening a Muvizu:Play scene, of course - is create a scene we want our superhero character to fly over. A city skyline, forest treetops... Basically, we want Camera 1 to show what appears to be the tip of what could be a sprawling world below. We're going to use what we see in Camera 1 to build the backdrop that our superhero will be flying against. 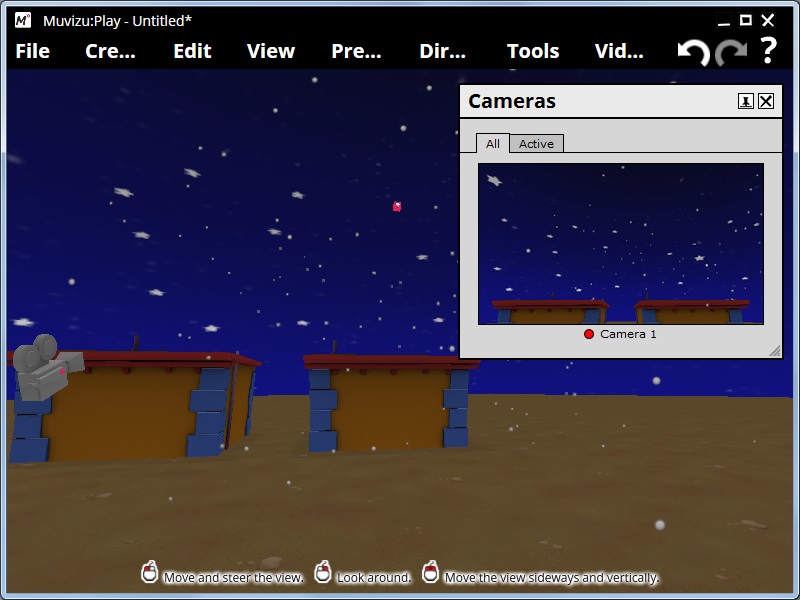 In the above example, I've added:

NOTE: Make sure that everything fits neatly inside your Camera 1 view, EG there are no objects which you can only see a part but not all of. And try to keep everything quite evenly spaced. This is because the background will be repeated later, and seeing only part of a building fly past your superhero could ruin the effect.

Right-click on your backdrop and select "Edit". When the window opens for that backdrop, expand the "Properties" category and click the box next to where it says "Image". Once the "Texture" window opens, select the "Textures" tab and click the "(Cameras)" category. In the "(Cameras)" category, double-click the "Camera 1" view to set the view through Camera 1 as the texture of your backdrop. 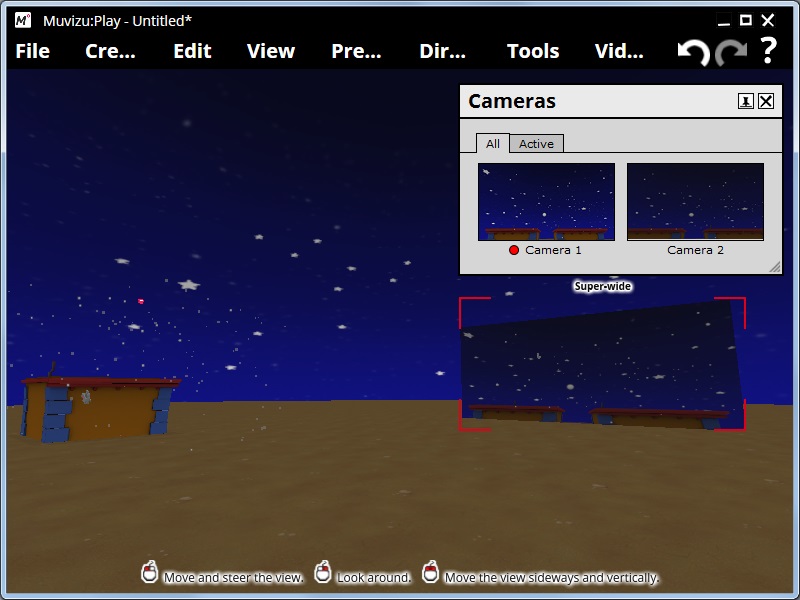 Now, here comes the clever part! Right-click on your backdrop object and select "Edit" again. Once the backdrop window is open again, collapse the "Animation" section and move the "Speed" slider up by dragging it to the right. The Camera 1 view shown on your backdrop should now begin to scroll from right to left (you can click the "Reverse Direction" checkbox if you want it to scroll from left to right)!:

The faster you want your superhero to appear to be flying, the higher you should set the "Speed" slider.

With your superhero character selected, prepare the looped flying animation for that character:

With your superhero character still selected, direct the looped flying animation for that character:

ALAKAZAM! Similar to what you can see in the above animated GIF, AS IF BY MAGIC Camera 2 should now appear to show your superhero character flying against a moving backdrop! I added another "Snow" effect near my character at this point, just to have snow appear "in front" of the character as well as "behind" him on the backdrop.

If you're still having issues getting a "moving" look during flying animations, here's a brief video tutorial on a similar method to achieving a flying effect